About a month after inserting two RFID implants (read more about it in this blog post) one of them broke! I decided to take it out. Here’s the full story…

The day it became unresponsive

I toyed around with the chip on a daily basis during this period, so I know precisely which day it stopped working. The only thing I did that day that I imagine could have affected the chip was that I jumped off of a 10 meter (32 feet) diving platform. Sure, it’s a high jump and there’s quite an impact when you hit the water, but I did not hurt my hand at all so it’s still quite surprising if it had anything to do with the chip breaking. Anyway, that’s the only theory I have. ¯\_(ツ)_/¯

Response from the supplier

I reached out to Alex Smith from Cyberise.me whom I bought the chip from. He was very apologetic and immediately offered to send me a replacement. I have nothing bad to say about the service he provides. He’s very professional and service minded. I will definitely order from Cyberise.me again if there’s anything I need from there. Kudos to Alex!

I’m quite sure I was just unlucky and got what we in Sweden call a “monday unit”. The implant is a bit long (18 mm) but functionally it worked well for my purposes. I wouldn’t hesitate to put in a new one, but for unrelated reasons, I might go for another NFC chip to replace it.

At first I was a bit disappointed and sad. My wonderful little toy that had offered me so much fun the past weeks had died! After a couple of days I got over it. Shit happens. Life’s life. I started to think about how to get it out.

I watched this video and it looked pretty easy. I had read somewhere that it would cost about $200 at a piercing studio to get it out. I wasn’t too keen on paying that money for someone to do a 2 mm cut and squeeze it out. Instead I talked my colleague into doing it.

Here’s what I bought: 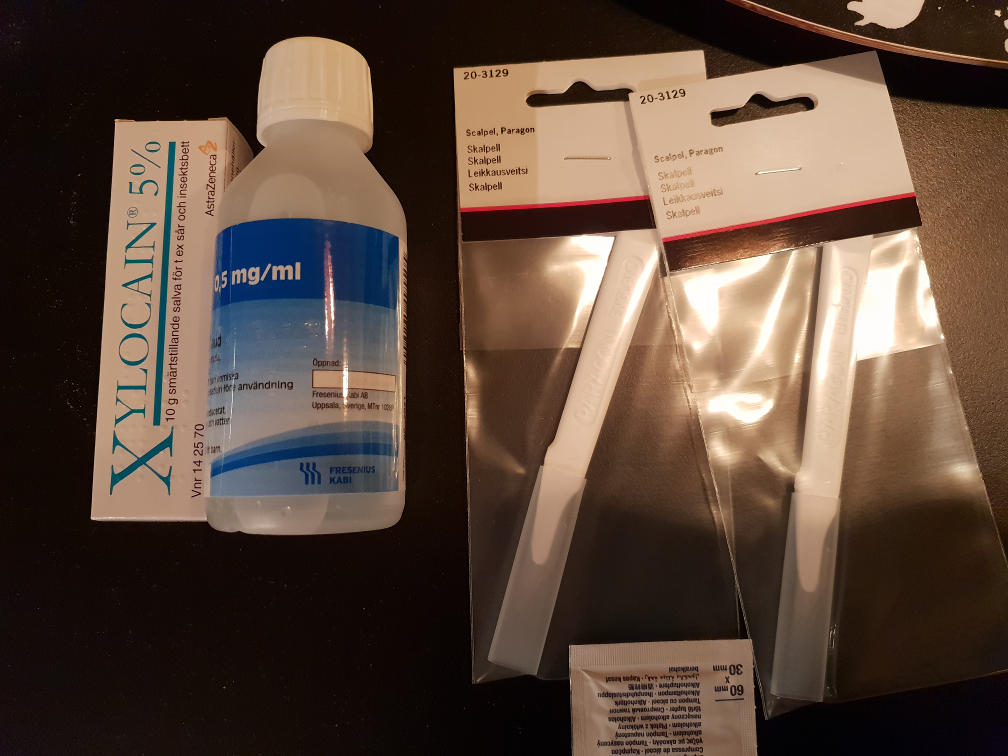 And here’s how it went down:

Spoiler: Colleagues were awesome, the whole procedure was a success. Big thanks guys!

The chip was placed in away so that I couldn’t push it forward (direction of my fingers). It was too deep under the skin for me to get my finger tips underneath it. I could however push the chip backward (direction towards my arm). Unfortunately it then only went deeper into my hand. To squeeze it out through the skin it had to be forced “outwards”. This was achieved by pushing it over an access card as shown in the video. This turned out to be quite successful and I don’t know how we would have managed if I hadn’t come up with that little trick.