I realized that RFID implants are no longer in “alpha stage”. They are fairly well tested, easy to get hold of them, they are cheap, inserting them isn’t a big deal, usage is getting widespread, and should you regret putting them in they’re actually quite easy to remove! 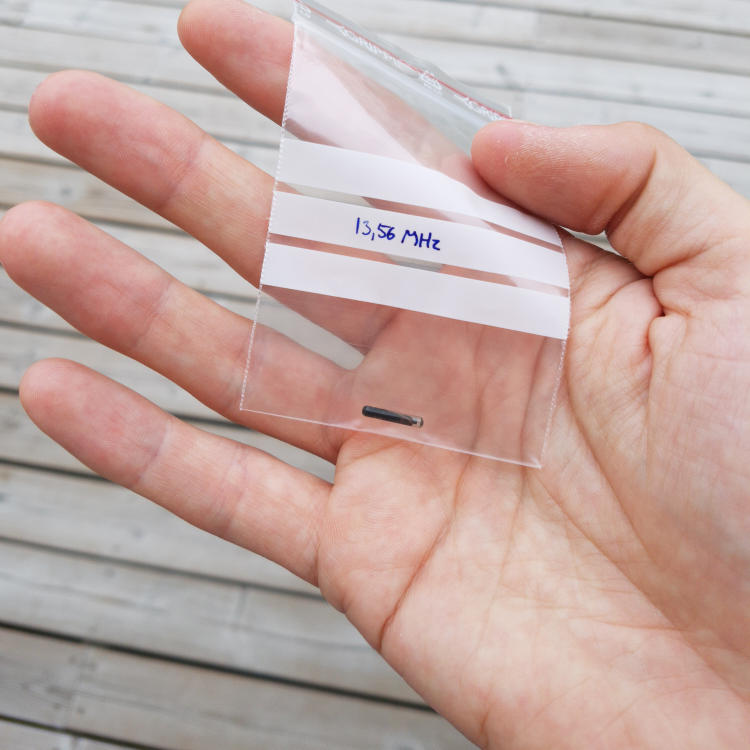 There are a few competing standards. These are the types of chips I considered… 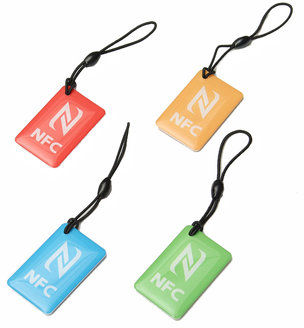 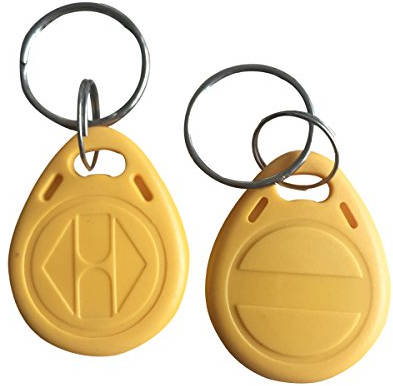 There are other alternatives too, but the above ones were the “candidates” I considered.

I had already installed a front door lock in my house, ID Lock 150, which is compatible with NFC cards, so I had kind of already decided to go with an NFC implant. Since I was curious to try to clone some of my cards I carried in my wallet, I went for a Mifare Classic.

At the same time I felt that I wouldn’t really be satisfied with the whole project if I still needed a fob for the office. So I decided to go all in and put an EM chip in the other hand.

There are versions of the Mifare chip that allows you to rewrite its unique identifier (UID, first bytes of the cards storage). A feature known as “Chinese backdoor”. According to the spec, these bytes should be read only, so technically speaking these chips aren’t compliant. It’s however quite useful if you want to create a 100% accurate clone of, for example, a loyalty card.

There are two implants on the market with Chinese Backdoors (that I know of):

Due to an issue with the xM1 Plus, I decided to go for the one from Cyberise.me.

The syringe doesn’t look like your usual flu shot: 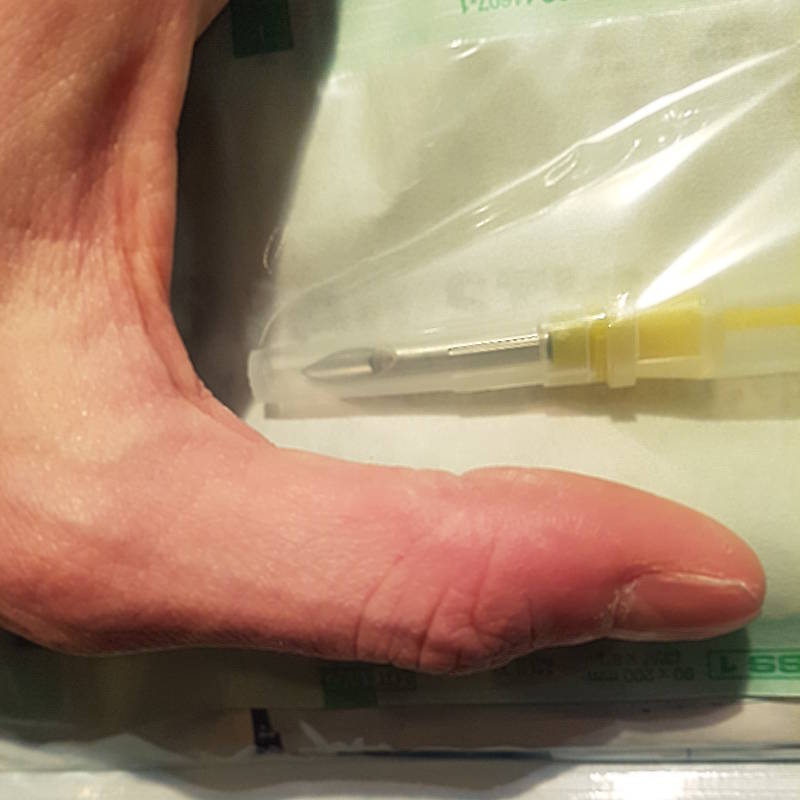 The MultipassMifare syringe next to my hand, still in its sterile wrapping.

From the limited research I did on the EM chip, it seems like they are all based on T5577 and have the same form factor. Since I was already shopping at Cyberise.Me I went with their MultipassRFID. 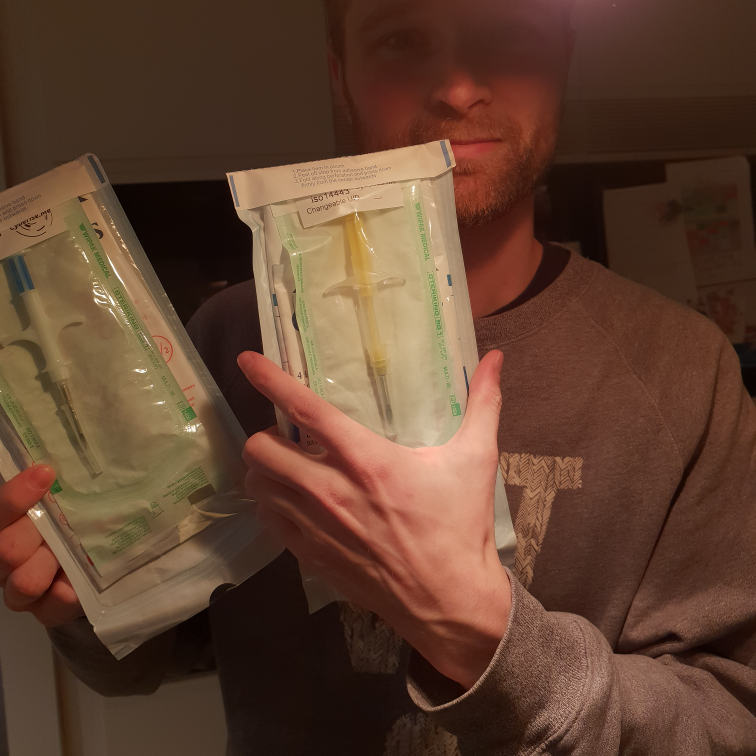 The procedure was uneventful. Videos of both insertions below. There are plenty of similar videos (better ones!) on YouTube.

I say in the first video that it hurt a little, but actually it was more an awkward sensation than a painful one. (No anaesthesia, and someone is poking around inside your hand!) It should also be said that the first chip was the larger one and it went pretty deep, which also shows in the aftermath pictures further down. The second procedure honestly didn’t hurt more than a pinch. 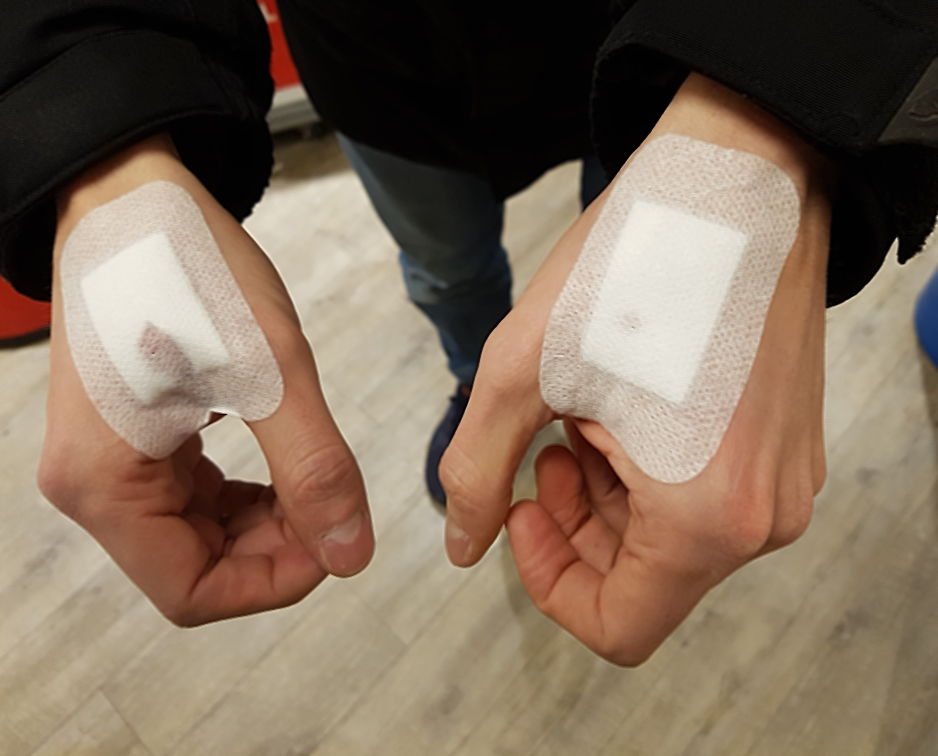 About an hour after the procedure. 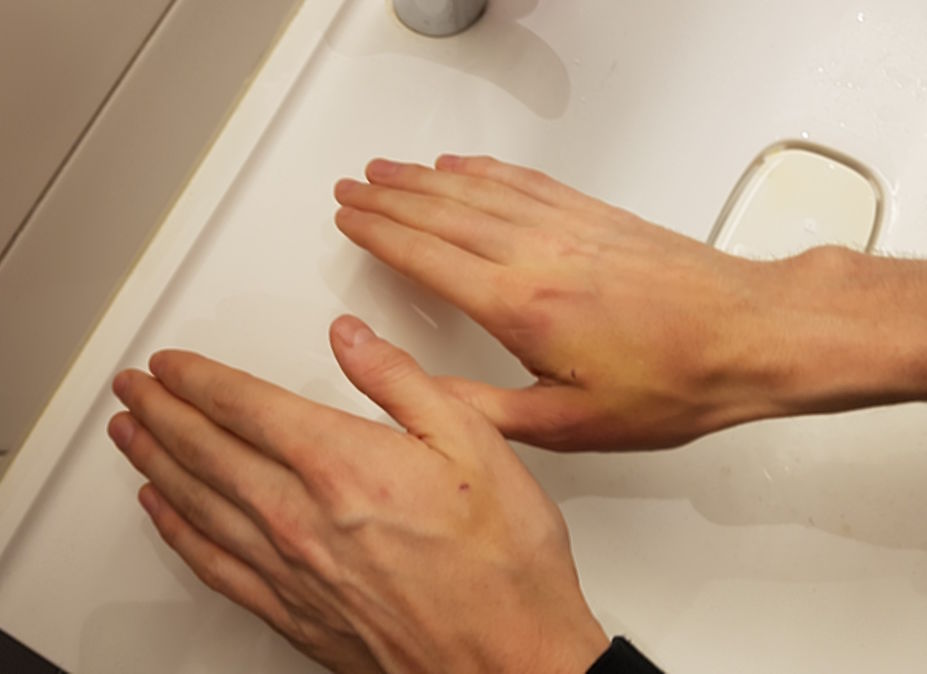 Six days after the procedure.

At one point my right thumb even felt numb for a while. I was a bit worried, but the next day it felt better and I had no issues after that.

The pictures of my hands further down in the next section are taken five weeks after the procedure, and as you can see, there are barely any scars at all.

Size of the implants

At first I didn’t think much about the sizes of the implants. “Bah, they’re measured in millimeters! I don’t think I’m very sensitive anyway.” But let me tell you, millimeters matter here.

Here’s a comparison of the chips I have on my desk right now: 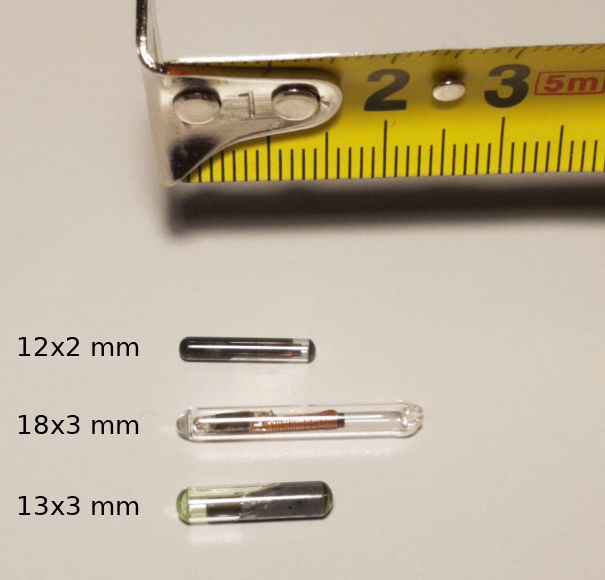 And here’s a picture where you can see outlines of the implants in my hands: 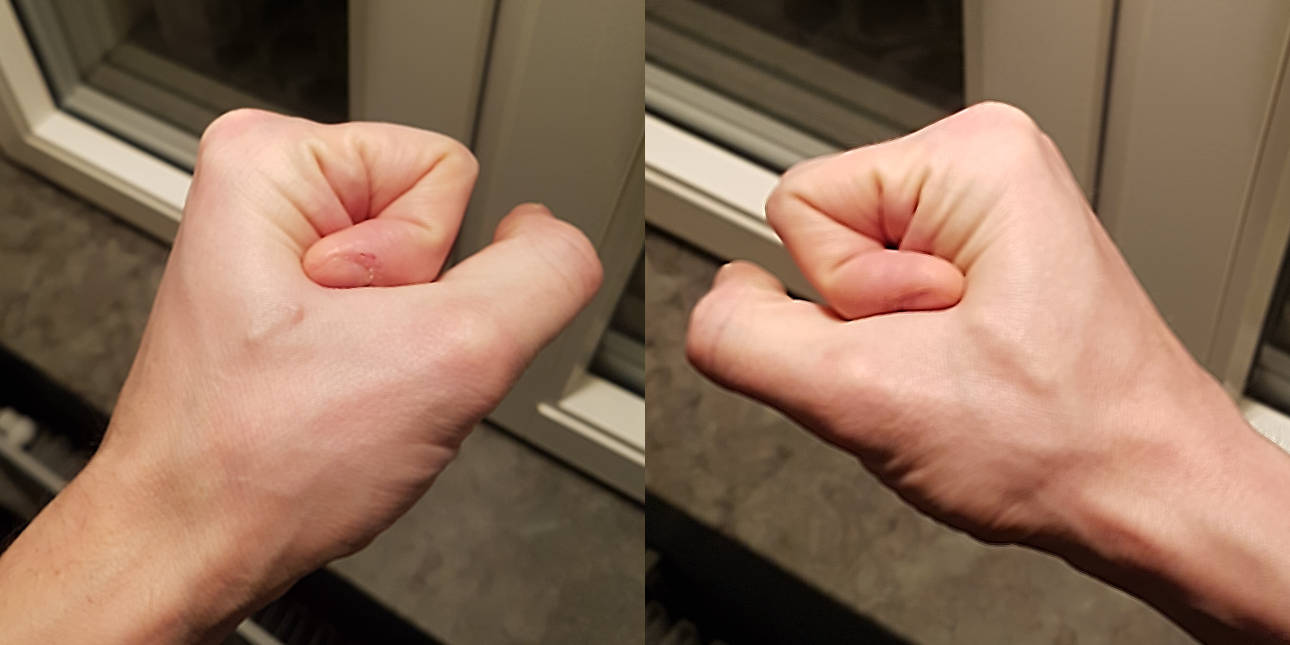 Now let me tell you why I think the size matters here. If you press on one end of the implant, the other end will tend to push upward (think teeterboard) which can hurt a little. Here’s an illustration:

Pressing on one end of the implant tends to push out the other end causing a slightly stinging feeling.

This effect is more noticible on my longer implant. You typically notice it when someone gives you a firm hand shake.

Also, if you have a longer implant, it takes less force to push it inwards into the hand when for instance pushing on a door handle. 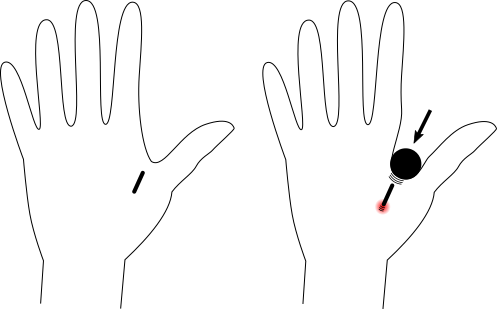 Potential pain when pushing on, for example, a door handle.

That being said, the uncomfortable feeling wares off. After a couple of weeks when the bruising has vanished, the implant has wiggled its way to its most natural positioned, and the body has “adapted” to the implant all of this is far less noticible.

Here’s me unlocking the door to my house.

Don’t let the video fool you. It looks easy, but it required about 20 attempts before figuring out the right position and angle for this to work. After some practice however, the success rate was pretty good.

I’m really happy I went with both an NFC chip and an EM chip. Admittedly, it’s not particularly inconvenient to carry an extra fob for the office and I can register my public transportation card with my door lock, so not even an extra card to carry for that purpose. But it’s sligthly more convenient not having to take out your wallet and it’s a lot more fun to unlock doors with your hands. :-)

I’ve learned a ton of things about the technology. If I some how woke up without my implants tomorrow, I would order new ones and put them in right away.

About a month after inserting the chips, my MultipassMifare broke for some reason! Read more about it in my next blog post…